Pocket Living, advised by Transport Planning Practice (TPP), has received planning permission for the redevelopment of the Keston Road Centre site, Haringey to provide a residential led mixed-use development despite a large number of objections. 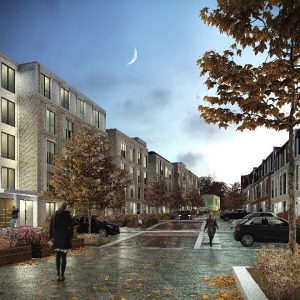 With some 400 objections to the application, this was a contentious scheme for local residents of Haringey.

The focus of the objections were:

The local parking concerns were predominantly due to the pocket-units having a parking ratio of just 0.15 spaces per unit in an area with relatively low Public Transport Accessibility. . There is also no controlled parking zone at present – and daily parking stress levels ranged between 86% and 100% throughout the day and overnight. Perceptions were that the scheme would have a detrimental impact on the parking situation on surrounding streets.

Transport Planning Practice submitted and presented a robust justification for a parking provision of 0.15 spaces per Pocket unit. This is due to the nature of Pocket buyers typically not owning cars, good access to public transport, evidence of low car ownership in the area and the provision of 163 cycle storage spaces. As a result objectors’ and Officers’ concerns were alleviated before the Planning Application was determined. This meant that, although parking was a serious issue raised during the consultation period it was not prominently raised by objectors at planning committee.

Corey Russell, Director of Transport Planning Practice said, “The best moment for me at the committee was hearing from a potential Pocket Living resident, a young lady in her mid-twenties who spoke about why she was in support of the Pocket scheme. She spoke about living in Haringey all her life, being in the expensive private rented sector and having difficulties in saving for a deposit to buy. It was very refreshing to hear from someone who will really benefit from the new scheme and we are delighted it has passed for her sake and many others”.

The development will help regenerate the area, and is planned to comprise of 126 new residential dwellings, of which 98 units would be affordable housing.  This project is one of over a dozen projects TPP have successfully advised Pocket Living on in recent years, several of which are built whilst others are under construction.

Matthew Woolgar, the Development Manager at Pocket Living said: “Pocket is delighted to have secured our first planning permission in Haringey. Our redevelopment of the Keston Centre site will help those first-time buyers in Haringey who are trapped between an unaffordable private sector but who are ineligible for social housing to own their own home. TPP’s logical approach to the parking issue is likely to have helped alleviate some concerns in the local area.”